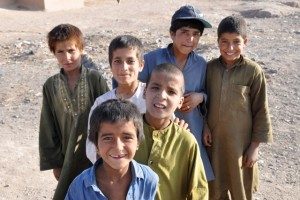 Literacy
The purposes of the literacy project are to help…
1.     the ethnic group maintain their ethnic identity by recording their history and cultures in their own written language
2.     community members improve the living conditions of the people and foster community development
3.     the people integrate socially with the majority population which is an important focus in the war-torn country of Afghanistan
In 1999 local leaders of this ethnic group of people asked for an adult literacy project that would develop a written language for their spoken language. Though they all spoke the dominant Pashto language, they realized that their culture would not continue without a written version of their “heart” language.
The oral form of their language has been in use for about 2000 years. But, the language was unwritten until 2003, when pro
ect leaders held a two-day seminar to begin developing a new alphabet. Most village elders in the area participated along with literacy teachers and delegates from local schools. An outside linguist led the seminar but local people made all the decisions relating to the alphabet.
An alphabet test book was published and was accepted by the people. As of 2009 several basic books have been published. Some include proverbs from oral tradition, which have been recorded in two additional languages. This guarantees this culture will not disappear. The goal now is to continue translating oral tradition stories and teaching the next generations how to “read” their “heart” language.